It was an unusual trip from Dowry Creek on the Pungo River.  We could see the edge of the sporadic rain on different occasions coming toward us.  We found that we could miss the rain if we slowed down and let it go past. The weather seemed to change several times as we went a short distance along the Pungo River, straight on the 22 mile, tree-lined Pungo and Alligator Canal, and then up the Alligator River to the marina.

By 10:50, the sky had lightened into a very dramatic, vivid blue sky with puffy clouds, and for the next hour we were treated to gorgeous landscape as we drifted along.

Close to noon, there was a strange phenomenon which looked like like a fog or bluish, dense smoke that choked the passage ahead in the distance.  We watched it carefully for awhile and prepared for passage through fire, but we never seemed to get in the midst of it, as if it were “horizonal”.  At one time it seemed to thin out, so I figured the smoke had cleared, but it appeared again. At some point, I knew we had passed the spot, but we had not had any effect except rain. Then the dense fog was behind us. I supposed we had passed through Brigadoon as it was evanescing.

We were about to enter this dense fog or smoke ahead of us.

Looking back, there was another trawler behind us, or was that us caught in the mystical image of a time warp?

In the afternoon a north bound barge passed us.  Soon after, another barge loomed which appeared to be southbound and weaving and blocking us from going past on either side.  We started to think it was out of control.  It was getting very close as if it were going to ram us, and no direction was indicated to pass on starboard or port.  The captain didn’t seem to know we were there.

Tom tried to contact him on the radio, asking again and again about his intentions.  I half expected a surly reply: “If I knock you up, I’ll marry you.”  I had a bad feeling when nobody answered at all. After the Brigadoon experience, I wondered if the captain was asleep (or dead) at the helm.  About the same time, Tom and I realized that the barge was actually going very slowly in the same direction as we were. Timing was now critical. Tom quickly cut a direct course sideways to starboard, cleared the stern and squeaked past in the narrow passage. Barges like their place in the middle. I didn’t see anyone aboard as we passed.

The Alligator and Pungo Canal has an interesting history.  It was a man-made cut through inland wilderness excavated in the 1920s and designed for commercial traffic in response to WWI U-boat sinkings off Cape Hatteras.  (A German submarine discovery was in the news lately.)

We saw cut stumps still present from logging the slow-growing Cypress at the turn of the 20th century. On the banks were live oaks and deciduous trees, some covered with vines like a lush rain forest, nestled by the water with hedges of bright new growth. Then areas of fragrant pine with fringes of tall grasses were interspersed.  So rare on this trip, I saw some flowers, white or pink, perhaps morning glories or wild potato vine. 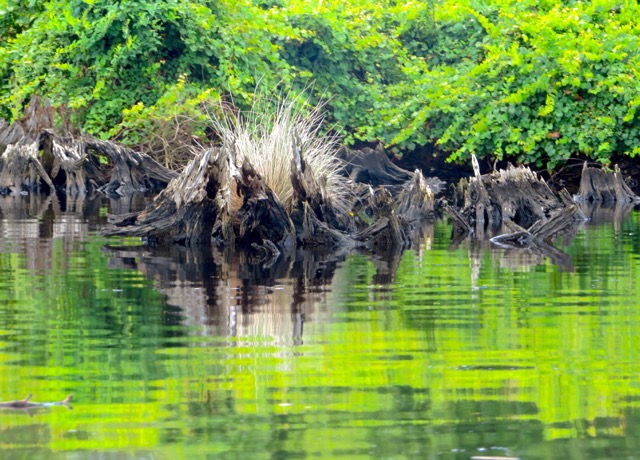 Grass growing out of a Cypress stump looked a bit like a porcupine at a distance. There were a lot of these non-porcupines.

Vine-covered areas looked too dense to walk through. I suspected Kudzu had spread out of control.

A bank of pretty, fresh growth went quite a distance and I hope it served well for erosion control.

These grasses, a better choice than Kudzu, looked planted along the edge, so I wondered if the burnt trees might also be a managed farm. There were large areas of these burnt-out forests, the fire coming either from controlled, manmade fires or from Nature’s electrical storms.

“Clear Reflections #2” is basically the same place at another angle a few seconds later. Things change quickly even going only 8 mph (7knots).

The canal opened into the wider Alligator River, but the scenery did not change much.  We saw an upscale, deluxe duplex duck blind with side stairs and landing, a garden of dead grass clumps at the front, breezeway, and a drape — or was that a feeder to the left? It seemed to be an pulldown door to the garage that hides the boat. It must be so nice to go sit on this porch and look at the ducks overhead, with the bonus of having room for a friend, dog, or guns. I didn’t see a porta-potty anywhere, but… is this what it takes to lure men away from the home, tv sports, and warm meals?

Since I didn’t marry a hunter, I could only imagine the thrill of getting up before dawn, wading out in boggy grass, getting my clothes wet and ooky, sitting on hard, spidery and wormy planks with cold morning air leaking through, sitting, sitting, sitting waiting for a rush of wings so I can test my skill against an unsuspecting duck, going after the duck wherever it fell, and bringing it back to my loved one, holding it proudly aloft, dripping, reeking, ready for someone else to pluck and cook. Hey, it just doesn’t get better than that for a day well spent. And curiously, this is probably describing the person who complained about having to sit quietly in a classroom.

About 4:00 we came into the Alligator River Marina with the hope of having a nice dinner at the marina. The dockhand helped us tie up and gave us the restroom code and the friendly advice not to use the laundry facilities unless something was really needing a heavy wash. He wouldn’t use it, he firmly emphasized, and continued saying it was $1 to use the washing machine, but you would spend at least $5 to get it to work. We felt that was real honest of him and were convinced to do laundry elsewhere. I had no need to witness the laundry’s condition, but if I had found it out by myself, I know I would have taken pictures of it and exposed its grodiness to the world.

A lady came out, probably to hurry us along, also gave us the restroom code and said there was a shower, too. She let us buy a beer from the cooler inside and then locked the place, leaving us as the only tenants on the dock. It was the Fourth of July after all, and she had family parties to attend. There was no dinner at the restaurant, so we fixed some spaghetti with red wine sauce and fresh mushrooms and enjoyed the beer in our own comfy cabin.

Tom, to my surprise, tried the shower and felt it assaulted him with 5 jets of piercing water needles hitting him at diverse angles. He was clean, but not happy with the experience. I believed we had explored the facilities sufficiently, so I passed on their amenities and was happy to make do with our own facilities.

Next morning I got up but I wasn’t fully awake to function, so we moseyed for breakfast at their convenience store cafe. I was never known for cooking, and I remember my brother “looking for the Goodyear sign” under the  egg I had kindly  fixed for him, but I still sometimes wonder what people who serve the public do to a biscuit or egg to make it like the one we faced now. When I asked Tom to describe it, he said, “It was cooked to order, providing you ordered bad food.”  We didn’t know we had to order the bacon to be cooked, so we took it back and requested to have the bacon “cooked more”.  I think the first time it was just their way of finding out if the heat was on, and since the solid white fat had turned clearer, they felt it was done.

We got most of the combo swallowed, and suddenly a feeling of gratitude that we had missed their dinner washed over us.  We listened to the local patois, an interesting rendition of English, and went back to our boat to wait out a rain storm. Afterward, the dockhand was there to help us shove off, which we appreciated.

Again, the messages and email had not gone out.  Again, we tried to call ahead for a mechanic or to use our WiFi hot spot, but nothing worked for a while. Tom finally got hold of a mechanic who was amused by the concept of a Friday request or a Saturday possibility. He laughed and snorted and Tom understood we were going to continue on our way without the generator.

For most of the day we were solitary cruisers on the waterway crossing the wide Albemarle Sound, slowing at times to avoid thundershowers. Then for a long while we went through heavy rain with no visibility. We were in the cloud — but still not a WiFi — cloud. Tom called “Securité” to announce the course we were cruising in the area and to say we were cruising blind in the rain. We were lucky we had a GPS iPad chart that showed the course and, very importantly, where we were on it.  What did people do before that? It’s not like anyone could stop by the side of the Sound until the rain passed.

Once we were out of the Sound, we snaked along the North River to a land cut that continued to a settlement called Coinjock. The lone dockhand nestled us on the dock, just a few feet from the cruiser in front of us and tucking our dinghy under the bowsprit of a luxury yacht behind us while I tried not to bite off my lip. Boats don’t have brakes; water moves things along. It is disquieting to depend on the competence of strangers.

There we had a wonderful dinner, the best seafood on the trip, and a nice shower.